CASS & CHRIS WEDDING LINK
Are you attending the wedding of Cass & Chris? If your answer is "Yes" then this 13 day tour package might interest you.
You will join Cass & Chris in a morning & an afternoon jeep safari exploring the Yala national park wherein elephants, sloth bears, toque macaque monkeys, painted stalk, jungle fowl, grey hornbill, and many other endemic species of wildlife roam freely. The most exciting part of this tour will be spotting the elusive leopards and you will have much to talk about if you did spot one. "Kudos to everyone who spots a leopard."
​Those not attending the wildlife tours with Cass & Chris can book either the 11 day Pre-wedding roundtrip or the 8 day Post-wedding roundtrip. Every tour includes airport pick up and drop off services. There is an option to extend the tour for 3 nights in the Maldives. Please email regd@leisureworldtours.net for bookings.
13 DAYS PRE- WEDDING TOUR
YALA SAFARI WITH cASS & cHRIS
​26 JUNE 22 - 11 JULY 22
RESERVE NOW/PAY LATER
This is a Pre-wedding tour including pick up from the airport on arrival and drop off at the airport for departures to Australia. Individual and group bookings are accepted. You can reserve a tour now and pay one month before your go. 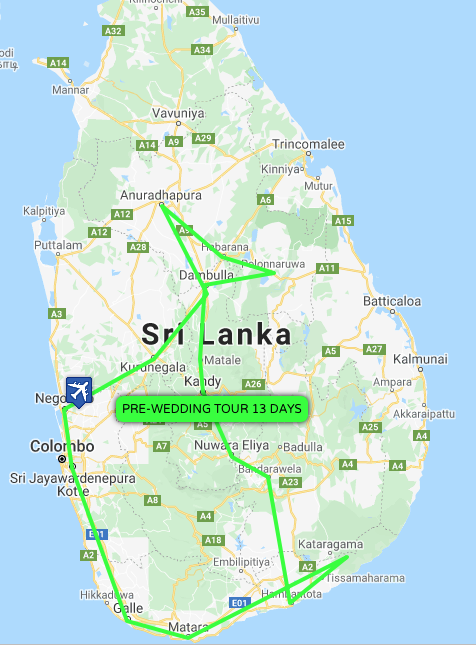 Please note: Your local agent will drop you off at the Shangri La for your 4 nights pre-booked wedding stay. You will resume the rest of the tour on 4 July 22 which will be from day 06 onwards.

11 DAYS PRE-WEDDING TOUR
WITHOUT YALA SAFARI
28 JUNE 22 - 11 JULY 22
Travellers attending the wedding in Hambantota will be picked up from the airport and transferred to Hambantota on day 3 for a 4 night stay, in preparation for the wedding on 02 July. The tour will recommence on 04 July which will end with a drop off at the airport from your hotel in Negombo. This itinerary is curated for those not willing to participate in the 2 night wildlife safari at Yala.
RESERVE NOW/PAY LATER 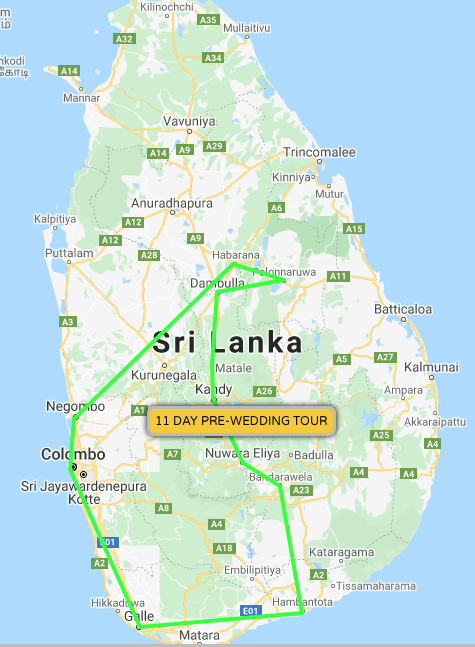 8 DAY POST-WEDDING TOUR
​04 JULY 22 - 11 JULY 22
This 8 day Post wedding tour has been curated for travellers wishing to tour Sri Lanka after the wedding. The tour starts with an early morning pick up (6:30 am) from the Shangril la Hambantota and will continue until drop off at the airport on the 11th of July. 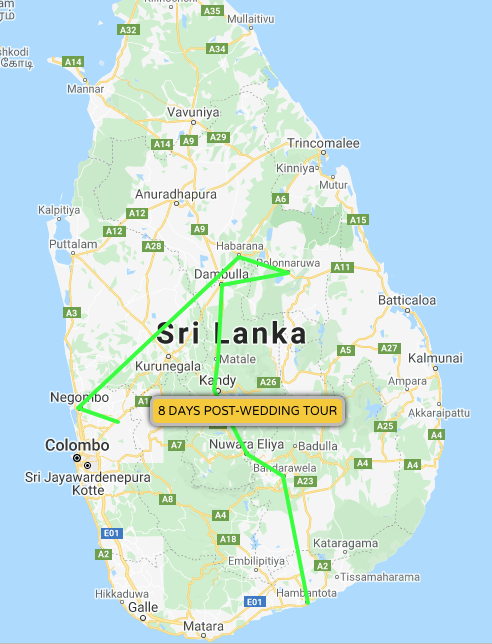 COST OF TOUR IN AUD

DAY TRIPS FROM hambantota - NALINDA PERERA
We have put together some day excursions for those who might want to make their own holiday plans during their stay at the Shangri la Hambantota. These trips will start from Hambantota and end at Hambantota. We hope you will find these itineraries useful.
WILDLIFE SAFARI
YALA NATIONAL PARK

BOOK THIS TOUR
WHALE WATCHING
Whale watching in Sri Lanka is one of the most unique and interesting Activity and you can start your private tour from Hambanthota with us. Mirissa is the best place for whale and dolphin watching tour in Sri Lanka. Whale watching season in Mirissa starts from November to April. Blue whales can be seen often. And also you will see sperm whales, fin whales, Bryde’s whales, dolphins and turtles.  Tour takes 3 or 4 hours. Boats are fully secured. Life Jackets

BOOK THIS TOUR
DAY TRIP TO GALLE & VIRGIN WHITE TEA FACTORY VISIT
Galle fort was built first by the Portuguese, then modified by the Dutch during the 17th century. Even today, after 400 years of existence, it looks attractive after reconstruction work was done by the Archaeological Department of Sri Lanka. Today Sri Lankan government and many Dutch people who still own some of the properties inside the fort are looking at making this ancient fort one of the modern wonders of the world. The Dutch fort also known as Ramparts of Galle withstood the Boxing Day tsunami which destroyed the Galle town. There are many Moor families residing in this fort alongside the Singhalese families and foreign nationals. More details regarding the history of the fort can be found at the visitors centre and at the Dutch period museum inside the Fort

Turtle Hatchery Witness the Stilt Fishermen
Turtle eggs are collected or bought from local villagers and buried in the sand hatchery. If there is lot of sunshine they hatch after 48 days. If it is raining it can take up to 60 days before the turtles emerge from the eggs. They are then placed in the tanks and for first 3 days remain without food to cleanse them of material ingested form the eggshell. They are then given small pieces of fish for a further 7 days. Learning to dive down into the tank to take the food. When they can do this. They can be safely released into the sea where they can fish for themselves on the coral reefs. Turtles are frequently injured at sea. Many get caught in fishing nets. Others are attacked by people attempting to catch and kill them for their meat. Surviving turtles are cared for by the Turtle Farm and those who make a good recovery can be re-released back the sea.

The Handunugoda Tea Estate
​30 minutes from Galle Fort lies the Handunugoda Tea Estate, perhaps the closest tea plantation in the world to the sea. However, this is not the only thing that makes the Handunugoda Tea Estate special. The estate is known as the Virgin White Tea Factory – it produces a white tea completely untouched by human hands. The process of tea plucking follows an ancient Chinese ritual where the choicest of teas were cut by virgins who never touched the tea with their bare skin and offered the resulting produce up as a tribute to the Emperor. Handunugoda mimics this tradition, although these days the ‘virgin’ concept only applies to the tea, not the tea pluckers! This white tea is rich in anti-oxidants and is said to be the most nourishing tea in the world. Coincidentally it is also one of the most expensive teas in the world fetching at over 1500 USD per kilo. According to the latest testing, Virgin White has an anti-oxidant content of 10.11 percent, which is said to be the highest naturally occurring content of anti-oxidants in any beverage. Marriage Freres which is perhaps one of the world’s most exclusive Tea Salons situated at Faubourg Saint Honore in Central Paris offers its exquisite client Handunugoda’s virgin White tea.
Experience Overview
A resident tea planter will meet you and take you around the private paradise of a working tea plantation. The plantation, which lies at sea-level, is the famed Handunugoda Tea Factory founded by Herman Gunaratne. Herman (or a team member) will take you on a private tour of his Virgin White Tea Estate plantations, where you will learn how the famous white tea is plucked and made into one of the best teas in the world. The visit ends with a tasting session and a piece of chocolate cake! There is also a small shop where you can buy Virgin White Tea – and other less expensive options as well.

BOOK THIS TOUR
DAY TRIP TO ELLA
Located over 1041 meter above the Sea Level. Ella is the famous place for Nature Lover. Many foreigners visit this place to unwind and relax. Ella is surrounded by hills covered with cloud forests and Tea Plantations. A short stop at the Ravana waterfall, a Trek to little Adams peak 1141 m in elevation, a walk through beautiful lush green Tea Plantations, a chat with local ladies plucking tea leaves,  a visit to the old Nine Arch Bridge built with blocks of stone and cement during the British occupation and the amazing view will make this day trip worthwhile.
Climb Little Adams Peak
The Little Adams Peak got its name because of its similarity in shape to the holy mountain Adams Peak, which can be seen further west in Nuwara Eliya.

Nine Arch Bridge
Commissioned under the British in the year 1921, the Nine Arch Bridge stands proudly, a testament to the engineering and architectural brilliance of the early 20th century. Ideally placed between the Ella and Demodara railway station, those choosing to walk along the bridge will be presented with scenes of rolling hills and dense jungle to delight in.
The Nine Arch Bridge, also known as the ‘Bridge in the Sky’ was constructed by connecting two mountains during the constion of the Badulla – Colombo railroad system. This bridge is 300 feet in length, 25 feet in width and 80-100 feet in height. It is one of the best examples of colonial-era railway construction in the country. The Bridge can be reached by travelling 2km on Gotuwala road starting from Halpe Textile centre in Badulla Bandarawela road. The surrounding area has seen a steady increase in tourism due to the bridge’s architectural ingenuity and the profuse greenery in the nearby hills..

Ravana Cave
The Ravana Cave is located about 2 km from the Ella town and 11 km (7 mi) away from Bandarawela. It is quite a small cave, measuring about 50ft wide, 150ft long and 60ft high. A famous legendary belief is that the cave was used by King Rawana to hide  Princess Sita from being pursued.
The cave lies 1,370 m (4,490 ft) above sea level at the base of a cliff. Ravana cave and is one of the most popular tourist attractions of a historical significance.

BOOK THIS TOUR
4 DAYS MALDIVES TOUR
This package is for travellers wanting to combine their itinerary with 3 nights in the Maldives. Reservation can be made either as an extension of their tour of Sri Lanka or as a separate Maldives only tour. Program details will be published soon.
AIRPORT TO HAMBANTOTA TRANSFER RATES PER VEHICLE
​BY NALINDA PERERA