This tour is specially designed to cover the East coast, historic cities, hill Country and  down south to a seaside resort nestled between towns and long stretches of beach where you can relax and unwind before you returning to your homeland.
Please note; This Itinerary can be taylor made to suit your requirements

Negombo - a famous fishing village North of Colombo. You will see a Dutch built Canal leading all the way to Colombo and the famous 17th century Dutch Fort bordering the beach. The canal itself is a hive of activity with all the fishermen traveling up and down in their adorned boats. This quaint town is also famous for its noisy fish market. Many churches in the area reminded us of early conversions to Catholicism during Portuguese occupation. South west of the town you will see the Negombo Lagoon which is surrounded by a densely populated ethnic mix of Sinhalese and Tamils and a coastline brimming with hotels of all categories. The mangrove swamps attract a huge variety of water birds including cormorants, herons, egrets and waders. ​

Dambulla stands as an isolated rock mass 500ft high and a mile around the base. This rock temple dates back to the First Century BC. The caves of Dambulla sheltered King Walagamba during his 14 years of exile from Anuradhapura. When he regained the throne, he built a magnificent rock temple at this site, which is now heritage listed. ​There is a total of 153 Buddha statues, three statues of Sri Lankan kings and four statues of gods and goddesses and Hindu deities Vishnu and Ganesh. The buddha's first sermon and temptation by the demon Mara could be seen illustrated on the walls of the cave. Skeletal remains of pre-historic human burial sites have been discovered by archaeologists in this cave dating back 2700 years.  ​​
Habarana is a quaint little village located in the cultural triangle bordering the district of Polonnaruwa. Being centrally located within the cultural triangle, Habarana has become a preferred base to visit the world heritage sites of Dambulla, Sigiriya and Polonnaruwa. The two national wildlife parks, Minneriya and Kaudalla have become famous for elephant gatherings and wildlife safaris. Organised walks into the heart of the village offer travellers a glimpse of the daily life, culture, cuisine. Canoe rides across a lake are an experience in itself with views of Sigiriya from a distance creating an exciting photo opportunity with lotus flowers in the background

Sigiriya - Sigiriya is a massive rock fortress built by King Kasyapa, who ruled the country from 473 to 495 CE. The capital and the royal palace were abandoned after the king's death. Stories of betrayal, intrigue, patricide, guilt and suicide surround this mighty citadel. After the death of King Kasyappa, Sigiriya was used as a Buddhist monastery until the 14th century. The rock fortress is famous for its frescoes and the mirror wall. Sigiriya today is a UNESCO listed World Heritage Site. It is one of the best-preserved examples of ancient urban planning. It is the most visited historical site in Sri Lanka

Polonnaruwa became the second capital of Sri Lanka after the destruction of Anuradhapura in 993. You will be exploring beautiful ancient palaces, temples, stupas and a large statue of a reclining Buddha.This ancient city dates back from 11th -13th century A.D. The monuments at Pollonaruwa have been well preserved. The circular relic house (Vata-da-ge) Lankathilaka, Thuparama, Royal Palace, Rankoth vihara and Galvihara with the beautiful rock-cut Buddha statues are amazing works of art.

Trincomalee is a port city on the northeast coast of Sri Lanka. Set on a peninsula, Fort Frederick was built by the Portuguese in the 17th century. Within its grounds, the grand Koneswaram Temple stands on Swami Rock cliff, a popular vantage point for blue-whale watching. The holy complex contains ornate shrines and a massive statue of Shiva. Nearby Gokanna Temple has panoramic views over the city and the coastline. Source: Wikipedia

Anuradhapura. There is much to see in Anuradhapura. Most renowned and venerated is the sacred Bodhi tree which is perhaps the oldest living tree in the world. There are 8 major palaces, monasteries and monuments to explore. Cycle around the precincts and get a more relaxed view of the area. The city’s most renowned relic is the sacred Bo-Tree which is said to have grown from a branch of the tree under which the Buddha gained enlightenment. It was planted 2250 years ago and is one of the oldest historic trees in the world. You will see dome-shaped dagabas built during the 2nd century BC some of which are still standing in ruins. You can cycle around the precincts to get a. more relaxed view of all the ruins.

Kandy - Sri Lanka's hill capital. Once a stronghold of the Sinhala Kings, is a very beautiful and picturesque town. It is 488 meters above sea level and next to Colombo, is Sri Lanka's most visited city. The main attraction of this town is without doubt the golden roofed Sacred Temple where the Tooth Relic of the Buddha is enshrined. There are many shrines and temples in and around Kandy, showcasing rare paintings, frescoes, wood and stone carvings.

Nuwara Eliya Tea Plantations & Factory - The ‘Little England’ of Sri Lanka, is set against beautiful backdrops of Mountains, Valleys, Waterfalls and Tea Plantations. It is supposed to be one of the coolest places in the Island, but it is really just like an English spring day, although the temperature does drop at night. All around Nuwara Eliya you will see evidence of the British influence, houses like country cottages or Queen Ann style mansions. The Victoria Park, in the middle of the town, is a lovely place for a stroll or a picnic and is also good for Birding as you get some rare birds in this Park.
Sri Lankan Tea - Tea was first planted in Sri Lanka in 1824, when a few plants were brought from China. More were introduced from Assam in 1839. In 1867, a Scottish Planter named James Taylor planted tea seedlings on 8 hectares of forest land, in the Loolkandura Estate. In 1873, the tea export industry of Sri Lanka began with a modest 23lbs being shipped to London. Tea will grow only on rolling terrain and is classified into 3 main groups of elevation as low grown, medium, grown and high grown.

Yala National Park located in the Southern coastal region is a wildlife sanctuary. The area is surrounded by dense forest, grassland and lagoons bordering the Indian Ocean. Home to wildlife such as leopards, elephants, Deer, Sloth bear, crocodiles, as well as hundreds of species of birds, Yala became famous for wildlife safaris with the main focus on spotting the illusive leopard. Located at Sithulpawwa is an ancient Buddhist monastery and a Magul Haha Viharaya temple showcasing ancient buddhist ruins and artefacts. The monastery and temple remain regular pilgrim sites for local Buddhists and clergy. Nearby caves contain centuries-old rock paintings.  ​

Galle Dutch Fort. Built in 1663, the fort still retains the atmosphere and charm of Dutch days. Many Old Dutch buildings are still intact inside the fort. The best way to see the fort is to walk around until it is time to watch the sunset. The Dutch Museum, which is housed in a restored Dutch mansion of the time, contains paintings, prints, documents, furniture and ceramics from the Dutch colonial era. Dutch Reformed Church built by a Dutch Army officer in 1754 is a must-see building.

​Colombo - Originally a small seaport. Colombo became prominent after the arrival of the Portuguese in the fifteenth century, followed by the Dutch in the 16th century and then developed into a major city by the British in the late 18th century. Today, Colombo is a busy metropolitan city surrounded by High rise buildings, grand hotels, shopping arcades cafes, a variety of restaurants serving international cuisine and busy night life for those seeking fun.
The old Fort district, the Pettah market, the Wolfendale church built in 1749, The Kelaniya Historic Buddhist temple, the Gangaramaya temple, the old parliament house, the Galle face green, the museum, the Dutch Hospital. All of them reflect a treasure trove of grand old colonial architecture blending gracefully with modern building spread.

INCLUSIONS
EXCLUSIONS
VALUE ADDITIONS
REVIEWS
Hi Reg – sorry it has taken me so long to reply.   This house sometimes seems as if a tornado is passing through!    Leo and I enjoyed every minute in Sri Lanka and thank you so much for all the organising you did.   I still go by everything we filled in on the sheet given to us in Sri Lanka.   Could not fault the hotels, tours, meals and Suren was an added bonus.   Perhaps the last night in Colombo – could be at a different hotel.  But the staff did all they could to help us.   Thank you also for coming to see us on the two occasions that you did.   So many people are going to Sri Lanka – I think it is going to be very busy.   I have told many people that when they are ready I have the Melbourne phone number for them to ring.   Actually have been asked by a couple if we would like to go again with them!   I wish you well in your venture and so happy Ann and Geoff asked us to join them.
​Good luck and good health always..
Regards Leo and Judy Robertson.
NSW Australia
Dear Reg & Nalinda,
We arrived home yesterday afternoon, having stopped off in Singapore on the way home.
We both would like to thank you very much for such a great tour, it far exceeded our expectations.  Please extend our specific thanks to Suren, who was outstanding - professional, considerate, flexible and innovative - and always happy, and went way beyond what is usually required of a tour guide.
We are happy to recommend Leisure world tours / Fun holidays - which would be the best address to direct enquiries to ?
Best Regards
Myl & Paul
​Bendigo Australia
Hi Nalinda & Reg
How are you? Hope fine. As for us we all fine. You have always been in our thoughts but unfortunately we have been so busy since we came back from Sri  Lanka that I did not write back to you. Went on a cruise and came back on Monday. Just now came back from a wedding.
Thank you very much for making it memorable for us. Few things we missed but they were beyond our control .We enjoyed every moment of our stay  in Shri Lanka.
Thank you once again and do visit us when in Australia.
Graeme Addison
Australia
Hi Nalinda & Reg
Just wanted to send through a few kind words regarding our holiday last year. Feel free to use these on your website, etc. (Or if you could point us to your favourite review site, we'd be happy to leave it there too!)
We had the time of our lives on our customized tour from Fun Holidays. It was really well priced for our budget, and included everything we wanted to see (and FunHolidays helped us make our itinerary even better with their advice!) The driver was professional, courteous and honest, and got us everywhere feeling safe and relaxed. Overall, an absolutely fantastic experience that we'd happily recommend to anyone thinking of visiting amazing Sri Lanka.
Dominic and Shiroma
New Zealand
Dear Reg,
My girlfriend and I were really happy of our driver Nuwan Sity.
He was driving safely and always ready to stop on our request.
He was extremely friendly and able to explain the culture and story of Sri Lanka.
He definitely improve our experience and I highly recommend everyone to hire your service and Sity.
Best regards
Alberto Campanaro
Italy
ROUTE MAP 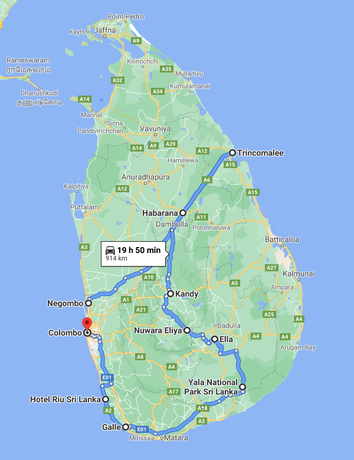